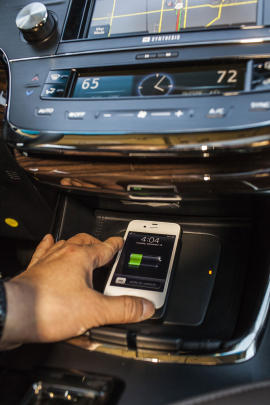 People have been modding wireless inductive phone chargers into their cars since the Palm Pre and its magnetic Touchstone, but Toyota claims today to be the first automaker to offer the tech with its announcement that the 2013 Toyota Avalon will be available with Qi wireless charging.

Specifically, the Qi wireless charging will be available as part of the 2013 Avalon Limited’s and Hybrid Limited’s $1,750 Technology package, so you’ll also want to make sure that you’re interested in the radar cruise control, precollision system, and automatic high beams that also come as part of that package before checking that option box. It would be nice to see the Qi charger broken out into a less expensive option, as it doesn’t seem like it really has anything to do with the features that it is bundled with. (While I’m making tech wishes, it would really be nice to see this relatively inexpensive technology just be made standard on the over $40K Avalon Limited and $42K Avalon Hybrid Limited.)

The technology will manifest as a pad integrated into the center console, just below the infotainment pod.

To use the Qi charging, drivers will need only to set a Qi-compatible phone (such as the Google Nexus 4 or Nokia Lumia 920) on that pad. Incompatible phones, such as the Apple iPhone, can be made compatible with the addition of a charging sleeve, which the owners will have to furnish themselves.

Toyota is claiming this news as the “World’s First Application of Qi Wireless In-Car Charging,” but earlier this year, Chrysler announced that it would offer a $200 wireless charging pad option for the 2013 Dodge Dart. It is unclear if Chrysler’s in-car wireless charger is specifically compatible with the Qi charger, so Toyota’s claim may stand up when faced with this technicality. Additionally, we believe that the Dart’s charging mat is a removable accessory that drops into the center console, rather than one that is integrated into console.

Here’s a video review of the car: