Now that gadget makers have figured out how to build wireless charging into cellphones, tablets are next, says a consortium of more than 100 companies that aims to standardize and popularize the technology. Representatives from the Wireless Power Consortium (WPC) told Forbes they plan to show a wireless-charging tablet at the upcoming Consumer Electronics Show (CES) and believe the technology will come to market sometime in 2012.

The idea behind wireless charging is simple. WPC members believe gadget-charging will be easier and more convenient if consumers can place their devices on specially prepared surfaces rather than fumble with cords and plugs. WPC’s chargers mostly come in the form of small, mousepad-like mats, though the necessary coils and antennae will eventually be built directly into furniture. All Qi products operate via magnetic induction. 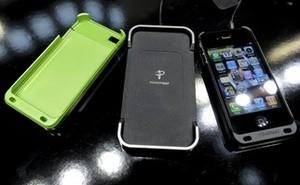 The WPC was established in 2008 to push this idea forward and coordinate standards between interested companies. Unlike the wirelessly-charging devices produced by, say, Palm, the WPC wanted to ensure any of its members’ products would work with those of other members. That remains true even though the WPC’s membership has expanded to 101 companies ranging from phone vendors (Motorola Mobility, Nokia) to chipmakers (Freescale, TI) to wireless carriers (Verizon Wireless, NTT DoCoMo).

In August 2010, the consortium released the specifications for its standard, dubbed Qi to represent the notion of vital energy. The first Qi-enabled products launched in late 2010. Qi-integrated cellphones — from HTC, LG, Motorola, Samsung, Fujitsu, NEC and Sharp — followed in 2011. Camille Tang, President of ConvenientPower, a Hong Kong-based hardware maker that helped found the WPC, says there are now about 17 cellphones globally that integrate Qi wireless charging.

Tablets are one of the consortium’s next priorities. Bret Lewis, Director of Fulton Innovation, a subsidiary of Alticor Corporation that is another WPC co-founder, says between 10 and 15 WPC member companies are working to develop a wireless charging standard for tablets and produce the necessary components. (The tweaks are necessary because tablets need twice as many watts to charge than phones do – 10 watts versus 5 watts.)

The WPC has also been developing a wireless charging standard for laptops for six months, says Lewis. Like tablets, he expects that standard to be completed sometime this year. Once those WPC standards are set, Qi tablet and laptop chargers will be able to charge phones and vice versa.

“Consumers shouldn’t have to have different pads or charging areas for each kind of device,” explains Lewis. (Phone/tablet interoperability is one reason why the WPC is taking longer to enable wireless charging for tablets than HP, which released a wireless charger for its TouchPad tablet in the summer of 2011.)

The WPC also believes consumers shouldn’t have to carefully place their gadgets on a precise spot to charge them. The consortium is reviewing new designs that use magnetic resonance to allow charging over a distance of a few inches. That would enable wireless charging through a countertop or wall or just in the general area of a Qi charger. “We designed Qi with flexibility in mind,” says Lewis. “Consumers want more freedom [around charging] to meet their lifestyles.” 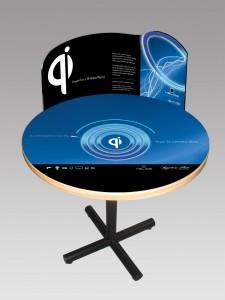 Furniture like this table can also be Qi-enabled. Users would be able to place a gadget anywhere on the table to charge.

After tablets and laptops will come Qi support for desktop PCs, home appliances and power tools, according to Tang and Lewis. Qi integration in car consoles is in the works, too, with about five auto manufacturers signed up to include Qi in cars that will debut in late 2012 and early 2013. Tang and Lewis say the WPC should eventually be able to specify ways to wirelessly deliver up to 120 watts of power to devices.