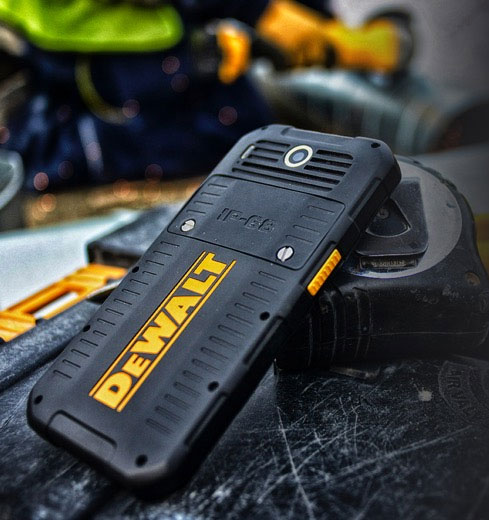 DeWalt, known for making hardware tools, has taken the same route as Caterpillar and made their own tough smartphone.

DeWalt’s smartphone has an IP68 rating which means that it could survived through 2 meters of water for around 30 minutes and is resistant to almost all accidents that could ever happen to it. These accidents include being dropped onto concrete from 2 meters high and being exposed to extreme temperatures. This smartphone is built to survive as much torture as it can possible go through in real world scenarios.

The screen on the rugged smartphone is an HD Bright View 5-inch screen with Gorilla Glass 3 protection on top. DeWalt made their screen usable even with gloves on, for people in construction or under cold-climates.

Inside it is the usual, 16GB of storage space with microSD card functionality, 2GB of RAM. The workhorse chosen is the MT6735 at 1.3GHz with a 3950mAh battery which is more than enough for the whole day. Charging this battery won’t be a hassle since it has Qi wireless charging built-in. It also supports dual sim cards with 4G LTE connectivity, along with NFC, WiFi, FM tuner, and Bluetooth 3.0 for the smartphone’s connectivity needs.

You may check out DeWalt’s strong smartphone here for the other features. The price is said to at a pricy $544, but if you need a phone that will take a beating, that price might be more reasonable.