I recently sold my Galaxy S3 and decided to get a Galaxy Note 2 instead. I sold the charging circuit with the S3 which meant that I had to make another one for the Note 2. This time, I decided to use copper tape instead of wires to reduce the bulge on the device. This method is similar to the way I did it with the S3 except that you do not need to solder this way. Thanks to the various threads on the XDA Developers Accessories forums for the idea!

Again, this mod uses Palm’s Touchstone chargers to get wireless charging. There is now another way to get wireless charging, which uses the Wireless Power Consortium’s Qi standard. Many new devices use the new Qi standard like the Nokia Lumia 920 and the Nexus 4 and many Qi compatible chargers are coming to market which means there is a wider variety of chargers to suit your needs. There is even a Qi standard charging receiver for the S3 and Note 2 so you don’t need to do all of this. You can just buy the receiver patch, stick it on and you have wireless charging. However, the one thing that is stopping me from using Qi chargers is the price. Currently, Qi chargers cost at least 50 dollars shipped to Canada and finding the receiver patch is hard unless you pay upwards of 80 dollars for a charger and receiver. Compare that to using the Touchstone which also charges wirelessly but costs less than 10 dollars for a charger and also less than 10 dollars for a receiver.

-Palm Pre/Pixi Touchstone Battery Cover (I used a Pixi cover this time instead of the Pre)
-Palm Touchstone Charging Dock (again, getting the bundle with AC adapter and USB cable is recommended as the dock does not work with some AC adapters and most USB cables won’t fit in the USB slot of the dock)
-Copper tape (getting ones with conductive adhesive is recommended, as it was slightly more difficult when I used tape that was conductive on only the non-adhesive side)
-Multimeter (to double check that you have the proper polarity connections)
What to do:
First make sure everything works. Plug in the dock and place the battery cover on the dock. Use a multimeter and place a probe on each exposed terminal. It should show a voltage of around 5V, if not, then the dock or the battery cover do not work. 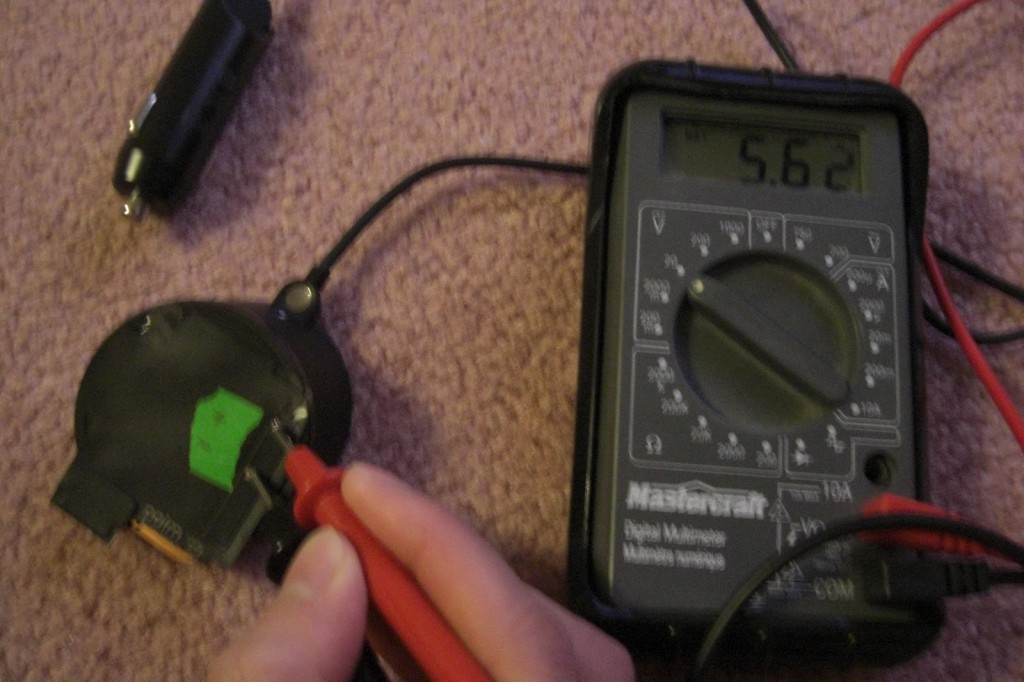 As seen above, I removed the receiver patch from the battery cover and trimmed away some of the excess black plastic (don’t cut the silver foil, the dock needs that to work properly). I placed the patch on the dock and measured to get a voltage of 5.62V. This also shows which terminal is positive and which one is negative. I have labelled mine with green tape as seen in the picture.

Next, plug in your phone to a normal charger (USB or wall charger) and place your multimeter probes into the two charging ports on your phone. This will tell you which port is positive and which is negative. If you are lazy, you can see from above that the port closest to the SIM slot is positive and the other one is negative. I placed another label indicating the polarity beside it.

Now you can start working with the copper tape. I first made contacts that will fit into the wireless charging ports on the phone. I first cut a strip of copper tape of about 4cm (can be longer, you can trim it later) and then trimmed it down so that it will fit into the charging port and eventually look like the picture above.
To ensure good contact with the charging port, I took the strip of tape and rolled it up so that is a bulge. I did that by using a pair of tweezers. I grabbed the tape with the tweezers at one end and then wrapped the tape around the tweezers until the bulge was about 3-4mm thick. If you are using single sided conductive tape where the adhesive side is not conductive (you can test this with a multimeter) make sure that the conductive side is facing outwards as the conductive side needs to touch the charging port.

Now that you are done the bulge, take the remaining tape and shorten it down to 1-2 cm and then fold it once or twice to make it thicker so that it is easier to contact the foil that will be on your battery cover.

Make sure that the conductive part of the tape is facing outwards like with the bulge. You can now place this in the charging port and make a second one to place in the second charging port.

The tape should compress slightly to create contact with the charging port. You can place a bit of tape over the two ports to ensure that they stay in place, but leave some of the copper tape exposed as you need it to connect with copper tape on your battery cover.
Now you can start working on the battery cover. Take the charging receiver you removed from the Palm battery cover and attach it to the Note’s battery cover. I placed mine as low as possible as I needed space to place a small PayPass card in my phone too (more info on the PayPass card here). Now cut 2 long strips of copper tape around 10 cm in length each. On the charger receiver, peel off the black plastic slightly where the exposed terminals are and place the copper tape in between the terminal and the black plastic for the best contact. Make sure that the conductive side of the tape is touching the terminal.

Place the battery cover beside your phone so that it is easier to see where you should arrange your copper tape to. Now fold the copper tape and noting the polarity of the terminals, path it to each one.

The tape will probably be too long. Cut it down so that there is about 1-2cm extra for each terminal and then fold the back on itself to create a small bulge at the end (near where the green tape is in the picture above). This is to make sure that it creates contact with the foil on your phone.
Now you can place your battery cover back on your phone and place on your dock. If it does not work, you will have to troubleshoot. You can check to see if the copper tape on the charging ports of the phone are connected. Plug in your phone to a normal charger (USB or wall charger) and then use the multimeter on the foil and see if you get a reading. If there is a reading then troubleshoot the battery cover. Use the multimeter on the foil on the battery cover when the cover is placed on the charging dock and see if you get the same 5V reading when you were testing if the battery cover works. If there is no reading, then adjust the connection from the foil to the receiver terminals. If there is a reading, then there is a problem with the connection between the battery cover and the foil on the phone. Add more foil so that the bulge is thicker and make sure the foil actually touches each other.

Now that troubleshooting is done, you should have a working wireless charger. If you are on a stock rom, there will be a popup indicating you are using wireless charging. Some custom roms will just show charging. You can finish up by covering the parts of the foil in electrical tape to protect it and make sure nothing shorts out.
With the wireless charging completed, my next project will be to make a nice wireless charging area in my car.
EDIT: Forgot to thank the XDA Developers forums! People mentioned using copper tape instead of wires to avoid creating a bulge in their battery cover while I was reading on how to add wireless charging to my Galaxy S3. I wanted to use copper tape for the S3 when I got it, but didn’t have the tape at the time so I went with wires. I made sure to order some and try using copper tape when I was ordering the rest of the components (Touchstone, battery cover) for wirelessly charging my Note 2 .
Original article by Derek Chen

Art Of The Possible: The Next ‘Wireless’ Revolution In The Enterprise