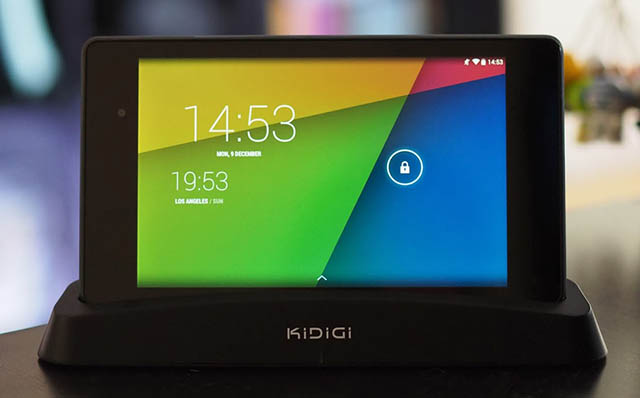 Feature-wise, there’s little to say. The dock accommodates the Nexus 7 in a landscape or portrait orientation, and features little more than a blinking LED at the front which indicates whether your tablet is charging or not, and a micro USB plug on the back to power the dock. It’s important to note, though, that the portrait orientation places the wireless charging mechanics out of alignment, so you can only charge in a landscape orientation.

lacing the Nexus 7 in the dock is straight forward; there’s no lock-in or click-in function. The device simply rests neatly in a recess that doesn’t allow the tablet to be easily dislodged from its position and when paired up with my (now ageing) Bluetooth keyboard, it makes my tablet much more functional. So much so, I found it often replacing the need for my laptop or PC to be turned on. The power feed into the dock is recessed and a firm fit which (in my testing) makes dislodging the power cable accidentally near impossible.

The guys at Gadgets 4 Geeks have kindly offered our readers a 10% discount across their entire range of products in the lead up to Christmas which means instead of paying $49.45 you’ll be up for a bill of $44.95 for the Nexus 7 Wireless Dock, which compares favorably to less-suitable wireless chargers that can be hard to find in stores anyway.

To claim the 10% discount, use this code: AD-GEEKMAS

It’s not the cheapest dock you’ll find for a 2013 Nexus 7, but the build quality and convenience of Qi Wireless charging should be more than enough to get most gadget lovers over the line for the purchase here. Having had one of these in my possession for a few weeks now, I’m not keen on relinquishing it which I guess means I’ll have to buy one now.

Editor’s note: Chris has had one of these for six weeks or so now, and loves it. Thoroughly recommended.

Are you an accessories junkie for your mobile devices? Let us know your favorite purchase and how it’s enhanced your digital life