Qi is the de facto standard for wireless charging and it has been around, in one form or another, for almost a decade. Given that the Wireless Power Consortium (WPC) created the standard, that means that deviation is unlikely going forward, especially since the WPC managed to get Apple, ASUS, HTC, Huawei, LG Electronics, Motorola Mobility, Nokia, Samsung, BlackBerry and Sony around the same table.

With its Wireless Charging Base, PNY is hoping to appeal to those who want a simple and stylish wireless charging dock to use at home or in the office. Priced at just over $60 on Amazon it’s not the cheapest wireless charger on the market, but can it do enough to prove a worthwhile purchase?

The PNY Wireless Charging Base ships in a simple retail box with the basic specs, some small hazard warnings, the warranty terms and a support number for the USA printed on the outside. There’s also a small note to say that the box does not contain a phone. 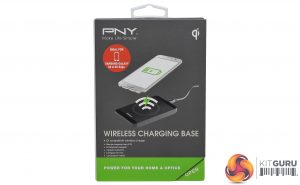 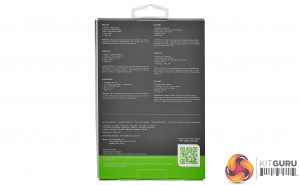 Inside the box we found the wireless charging base itself, a micro-USB cable and a fold-out instruction manual. 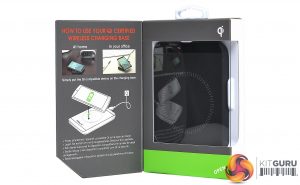 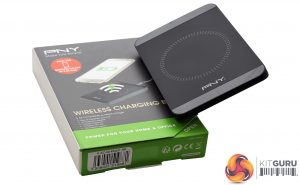 The charging dock is smaller than a modern ‘plus-sized’ smartphone which makes it quite portable. 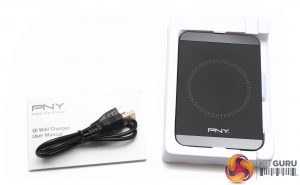 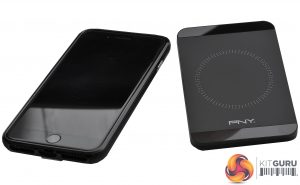 The front of the device sports a ring of strips, similar to a buffering symbol, and this indicates where the centre of your phone should be placed when charging. PNY has placed a glossy plastic strip at the top and bottom of the dock which seems to be purely for aesthetic reasons, but more on that later.

On the far edge we find the micro-USB slot which supplies the necessary power to actually charge your phone. 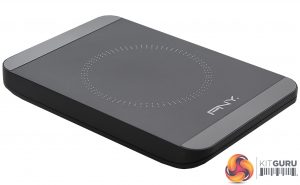 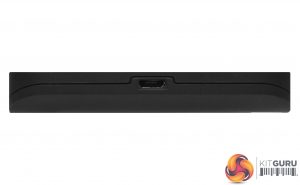 On the bottom of the device we find a tiny LED indicator that has three modes:

This provides an easy way to see if your phone is charging or if you need to re-position it slightly.

We tested the PNY Qi Charger with the iPhone 8+.

After an initial test (see ‘Issues’ below), we decided on a specific test sequence and ran through it three times. Each time the phone was depleted by playing Netflix continuously, then we charged it back up to 100%.

The tests were conducted in a ‘real world’ scenario, with the phone inside a case that is about standard thickness. The phone was switched to flight mode and rebooted each time to minimise the drain from background apps/connections etc. 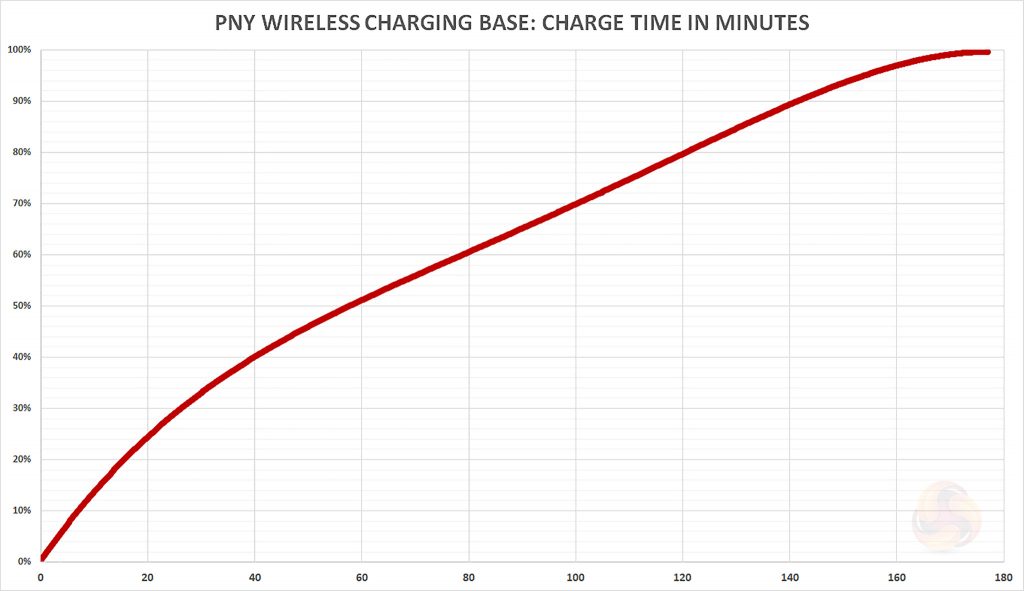 Given that the PNY Wireless Charging Base outputs 5V/1A when charging a device, it doesn’t charge very fast – as we would expect from a wireless charger. This is simply a limitation of wireless charging as a whole – modern ‘fast chargers’ can deliver far more in terms of output amperage, but wireless chargers offer the added convenience of being able to simply place down or pick up your phone without dealing with any cables.

After testing the device for the first time, a rough calculation told us that we’d hit 70% battery capacity in just over 100 minutes. We set a kitchen timer for 90 minutes and went about our business. When the alarm went off, we returned to find the phone lying next to the charger, with the battery on 5%.

After a brief investigation it seems that, although the phone was in flight mode with no apps running, we’d forgotten about an alarm that caused the phone to vibrate, meaning it slipped sideways off the charging pad.

We reckon this was because of those two glossy plastic strips placed at either end of the dock itself. They’re just quite slippery which results in overall poor ‘grip’ on your phone. Add in some vibration, and it seems that was enough for our phone to fall off the charging base.

The PNY Wireless Charging Base is a fairly conventional wireless charging system, with one noticeable flaw.

As we mentioned on the previous page, the main issue we have with the charging base is its two glossy strips – one at either end of the dock.

Simply put, the glossy plastic is just very slippery and it doesn’t take much for your phone to fall off the charging dock. In our case, the vibration from an alarm was enough to knock the phone off. We would’ve hoped that the wireless charger has enough grip to hold a phone in place for the duration of a full charge. 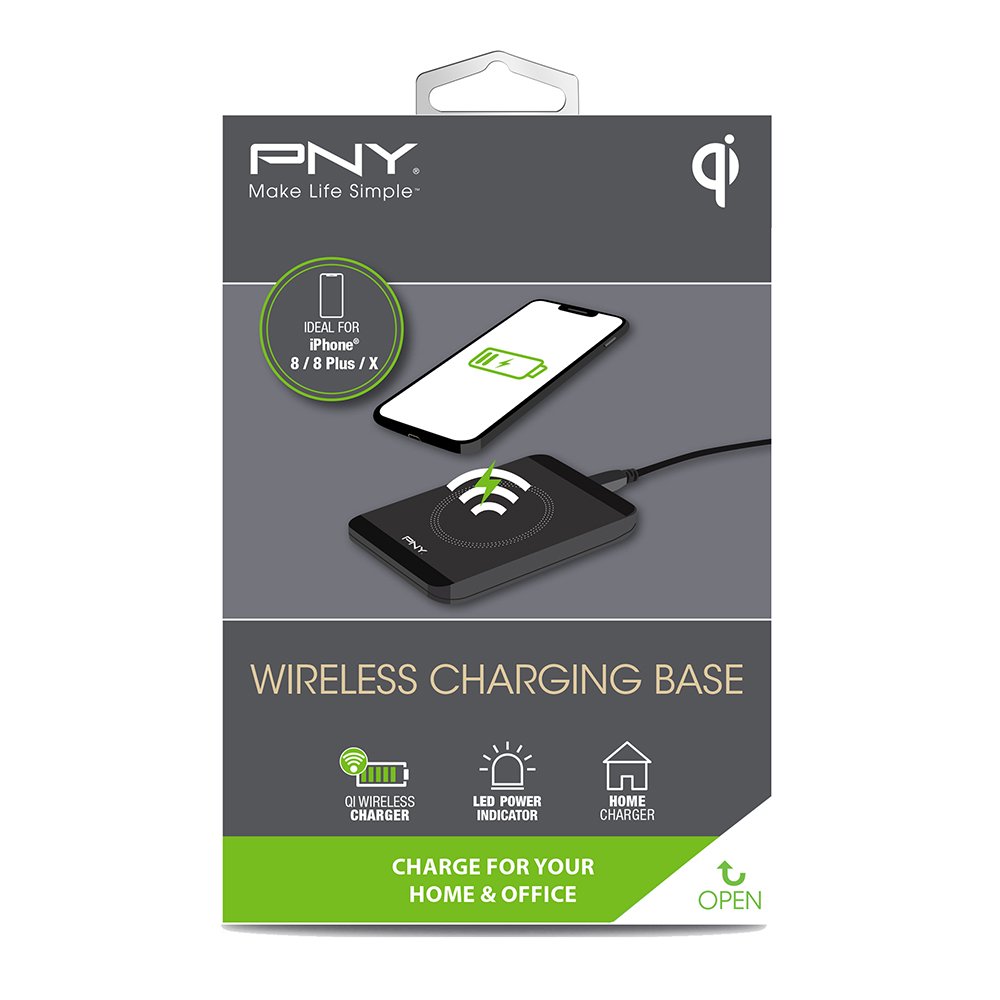 Everything else, though, is just fine. There’s a handy LED which lets you know if the phone is charging properly or if you need to re-position it slightly, and the overall look of the dock itself is quite appealing.

Wireless charging speeds aren’t going to be able to compete with a modern wired charger – but that is the case for all wireless chargers. It’s a trade-off between speed and convenience – put simply, you won’t buy a wireless charger if you need to quickly top-up your battery before going out. Instead, wireless chargers such as the PNY Wireless Charging Base are designed to offer a seamless transition between using and charging your phone – just place it on the dock and off it goes.

At just over $60, though, the PNY Wireless Charging Base is perhaps a little pricey considering its main design flaw. Amazon has a vast selection of wireless chargers available for less than $20, for instance. Still, it gets the job done and looks good while doing so – as long as you make sure not to knock the phone off.

You can buy the PNY Wireless Charging Base for $65.60 from Amazon HERE.

The PNY Wireless Charging Base is a good-looking product that brings the convenience of wireless charging to your home or office. The design does need a little re-think, however, as the glossy plastic strips make it easy for phones to fall off the dock.