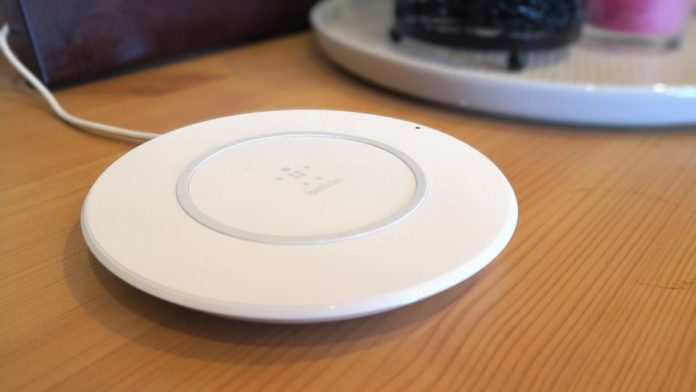 Belkin has worked with Apple to develop the Boost Up – a wireless charging pad that is compatible with the most current iPhone models. But is it any good? We gave it a whirl with an iPhone 8 to find out. And discovered a little surprise along the way.

Belkin’s Boost Up is a wireless charging pad that has been specifically designed for the iPhone X, iPhone 8 and iPhone 8 Plus.

It is white and round in design, with a green LED light to indicate when the device is charging, as well as a rubber ring to prevent devices from slipping off. It is designed to be compatible with most slim cases.

Inside the box, you’ll find a charging pad, AC adaptor and a 1.5-meter cable with a mount that seamlessly connects into the curve of the disc.

What’s Good About It?

Speed: At 7.5W, this is the fastest wireless charger you can currently get for an iPhone 8 or X. In my tests, it took just under three and a half hours to charge an iPhone 8 from zero to one hundred percent.

And while I rarely let my phone completely die, this speed told me that if I needed a slight top-up before heading out the door, the Boost Up is capable.

Also, let’s, not forget software updates can have a significant impact on charging speeds. Anything before iOS 11.2 doesn’t have the capability to charge more than 5W. So if you haven’t already, update your device!

Design: The Belkin Boost Up has a sleek design and doesn’t take up a lot of room. It looks attractive on a desk or in a living area, so if you care about aesthetics, this will be a plus.

I’m also a fan of the rubber ring that prevents an uncased phone from sliding everywhere. As someone who has been using the incredibly slippery Huawei Mate 10 for the past six months – this has become an important consideration for me.

Versatility: Creating a charging pad specifically for iPhones seemed quite singular. While I realize that optimization can be a great (and safe) thing for chargers, it is isn’t particularly helpful for homes that have a mix of Apple and Android phones.

However, the fact that it advertises generic Qi compatibility on the box made me curious. So I threw my Samsung Galaxy S8 on the pad and it started charging with zero issues. You definitely don’t need to buy two of these if you happen to have both Android and Apple devices in your household.

However, if that is the situation you’re in, I wouldn’t recommend the iPhone-optimised Boost Up.

In a turn of events that is unlikely to surprise anyone – Belkin also sell the Boost Up ‘for Samsung’. However, there is a significant difference in power.

The Samsung-optimised charger has a 15W capability, and for the same price as the Apple charger – $99.95. While it won’t charge your Apple any faster (and there can be no guarantees without proper testing) it is unlikely to charge it slower than 7.5W. Plus, it will hit the optimum speed for Samsung. Keep this in mind if you’re seriously thinking about buying a multi-platform wireless charger.

What’s Not Good About It?

Speed: While this is the fastest wireless speed you can get on an iPhone 8 or X, it still doesn’t compare to fast charging. If you rely on juicing your device up quickly, the tech just isn’t there yet.

This is because the iPhone 8 and X models use 1.1 Qi wireless charging, which is a bit old and only supports 7.5W. For example, if you tried to charge it on the ‘Samsung’ 15W version of the Boost Up, it will only charge at half of the charger’s capable speed.

And while this is an industry-wide issue, as opposed to a Belkin one, it’s absolutely worth thinking about if you’re considering dropping nearly $100 on a charger.

It will be interesting to see what Apple’s AirPower will have to offer when it releases (allegedly) later this year.

Should You Buy It?

If you’re a fan of wireless charging, this is the fastest you’re going to get with Apple at the moment. So for that reason, it’s a solid investment. That being said, you can get the 7.5W Mophie wireless charger for $20 cheaper at the Apple store. When the power is capped as low as this, it’s quite easy to shop around for the best deal.

If you would prefer something that is going to get you Apple’s claims for fifty percent charging in half an hour, then you might want to consider a USB-C to Lightning cable, as well as a USB-C Power Delivery device instead.

This isn’t the cheapest charging route in the world though. Alternatively, you could just opt for the cable and an ordinary power brick, but it will charge a little slower.